The Story of the Brass Plaques in the Floor

In going through some of the scrapbooks and other books, you can look forward to reading some history that might have been forgotten or lost, relating to St John’s.  From the beginning Isaac Witter had a dream of having a series of brass plaques inserted in the terrazzo floor of the church, from entrance to sanctuary.   The descriptions of each brass insert are from the architect’s own hand, quoted from a letter to Isaac Witter on August 5th, 1929.

“The usual symbol of St John, the eagle- because his Gospel soars on Eagle’s wings to the very throne of Heaven.”

“Based upon the Four Rivers seen in the vision of St John and represents the four Gospels.”

“A commoner symbol, representing the scroll of St John’s or his book of the Revelation.”

“The Maltese or eight pointed cross.  It is a well known symbol of the Eight Beatitudes and is called the ‘Regeneration Cross’, and is also called the symbol of St John’s Day. 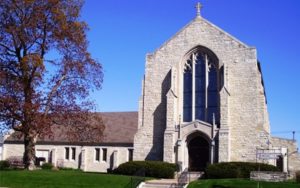